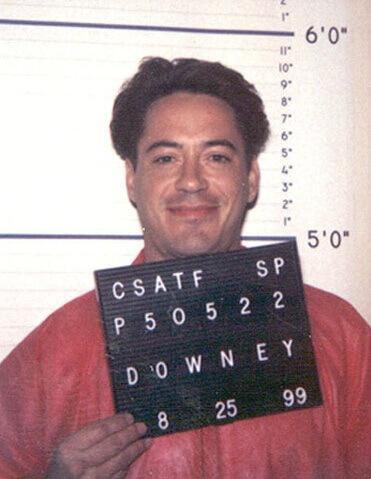 After almost a decade of keeping out of trouble, Robert Downey Jr has been pardoned by the California’s Governor Brown. Gov Jerry Brown granted Robert Downey Jr. a full and unconditional pardon of past criminal offenses. Cheers for that; but…

What the news didn’t tell their viewers is that 90 others were also pardoned by the California governor. We dig that to get a story in the frontlines it takes a big name, and RD Jr is a very big name.

Governor Brown pardoned the actor and 90 other people convicted of crimes; all of whom completed their sentences and had zero criminal activity after their release from prison more than 10 years past.

It was in 19997 that Downey skipped a court ordered drug test and spent over 3 months in jail. Again in 1999 he skipped another drug test and spent almost a year in state prison. Released in 2000 he was arrested for alleged cocaine and Valium possession and also being under the influence of said drugs.

July 2001 Downey pleaded “No Contest” to the drug charges and was sentenced to 3 years probation. It pays to have a really good lawyer…

Downey served 1 year in prison, 3 months in jail, close to 2 years on parole and 3 years on probation.

He has lived an honest and upright life, exhibited good moral character and conducted himself as a law-abiding citizen… He has paid his debt to society and earned a full and unconditional pardon.
— Gov. Brown

Elgibility of a California Pardon

To be eligible for a pardon, ex-cons must be out of prison for at least a decade and avoid committing new crimes and also, if they live in California, have earned a court granted Certificate of Rehabilitation.

While this doesn’t erase a person’s criminal history or seal their records, pardons can carry benefits such as allowing recipients to serve on juries and owning firearms if their offense didn’t involve a dangerous weapon.

At the end of the day it’s good to see that 91 people have been set free from past mistakes. What are your thoughts on pardons in California or Robert Downey Jr’s pardonowney-Jr-California? Please post your comments below:

You can download the PDF here: California Pardon of Robert Downey Jr.