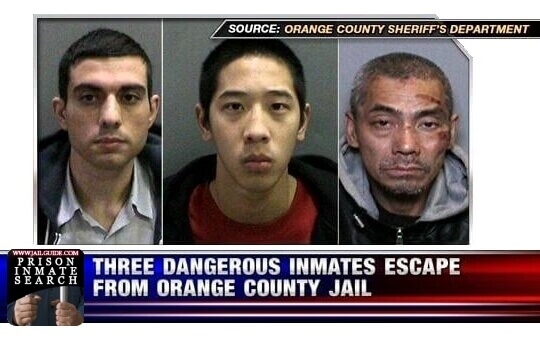 The California prison escape of Hossein Nayeri, Jonathan Tieu, and Bac Tien Duong made headlines across the nation thanks to the daring nature of their flight. The Orange County jail from which they fled had not seen an escape since 1988. However, the three inmates managed to pull it off relatively easily although they were captured the following week under bizarre circumstances. Nayeri and Tieu were spotted hiding outside a whole foods shop while Duong was capture the day before. But why escape from prison if you know you’ll be caught eventually?

How the Escape Happened

Did they receive help from the inside? Naturally… it was alleged that a 44 year old woman named Nooshafarin Ravaghi who taught English language classes at the jail was arrested. She was accused of helping the prisoners by offering them a Google Earth image of the area around the jail and providing tools, the latter charge she has denied. As of Feb 1st 2016, she was released with an ROR bond pending further investigation.

Hossein Nayeri was in jail accused of kidnapping and torture while Bac Duong and Jonathan Tieu were awaiting trial on the count of attempted murder. All three had pleaded not guilty and all three were in the same jail cell. Just after roll call at 5am they planned what was to be the perfect prison escape. The three men managed to crawl through a vent in the wall of the cell. They made their way into the plumbing tunnels and managed to cut through thick metal bars during their escape. With a makeshift rope, they managed to lower themselves to the street and escape. It was not until 15 hours later that they were discovered missing from the prison.

The three men then entered a taxi cab and forced the driver to take them 400 miles up the coast to San Francisco. The men stayed in the Bay Area initially in a small hotel room chain smoking and ordering Jack Daniel’s and beer while holding the cab driver hostage.

Eventually, Bac Duong took the cab driver back to Santa Ana and was arrested at an auto shop near the jail itself. Hossein Nayeri and Jonathan Tieu were caught the following day still in San Francisco inside a stolen van that was identified by a homeless man, Matthew Hay-Chapman. Chapman eventually earned the $140,000 reward for his identification of the van.

The Aftermath of the Orange County Jail Escape

It was clear that lax security measures that had grown steadily over time played a role in the escape of the three men. With no one having escaped since 1988, the thought of anyone breaking out was growing less and less each day and resulted in roll call checks that were up to 15 hours apart. The long period between roll calls gave the three inmates a huge head start which they used to their advantage. Only because they made a few critical errors were they recaptured. Had they been a little more diligent, it’s possible they might still be on the loose.

One thing that boggles the mind of most ex-cons, knowing what we know now, is how to disappear entirely? Being an escaped convict you’ll be looking over your shoulder every hour of the day. Not to mention having to continue to commit crimes in order to survive on the streets.

If you are going to prison and don’t think you can handle your time and consider prison escape, think again. We’ve written one of the largest manuals on how to survive prison and not escape. To help you survive when serving time, you’ll need to know what to do in order to make it through by successfully facing the dangers. The “How to Survive in Prison guide” contains everything you need to know so you can stay protected in this hostile environment. If you are looking at time behind bars, order today so that you can be fully prepared for the events that may occur. In prison, knowledge is power, so order “How to Survive in Prison” today!